Bali’s biggest and most sacred volcano Mount Agung has awoken after a being asleep for more than 50 years.

In September 2017, a dramatic increase in seismic activity was recorded leading the Government to increase the official alert status to the highest level later that month. In late November, two eruptions were recorded, with the second magmatic eruption on November 25th produced clouds of volcanic ash that necessitated the closing of Bali’s Ngurah Rai Airport for a 2.5-day period.

More recently, over the weekend period of December 8-9, 2017, even larger eruptions took place. However, prevailing winds carried the resulting dust to the northwest of the mountain and represented no hazard to aviation. Planes continued to fly. Bali’s airport continued to operate normally.

The simple fact: Bali is a volcanic island. The Island has four volcanoes in all. They play a central role in the geologic formation of Bali and predate the human habitation of the Island. Volcanoes have also played a party in Balinese culture, religious belief and history for millennia in the past and will remain to do so for millennia to come.

Because of declining visitor numbers following the late November eruption of Mount Agung, Bali is suffering a devastating economic downturn. Hotels are running at record low occupancies, tourist attractions are operating at 10% of normal visitor levels, and many restaurants are largely devoid of diners. Daily workers have been laid off. Staff placed on mandatory leave. Hotel service charges, that in some cases represented half of worker’s take-home pay, have almost evaporated.

Does Bali need a new paradigm when it comes to volcanoes? Are we looking at this massive force of nature in the wrong way? Let’s imagine for the moment that Bali’s Mount Agung undergoes more eruptions, one of which is equivalent in force to the devastating eruption of 1963 that killed between 1,100 and 1,500 people.
If such an eruption did occur (and there’s no guarantee that such an eruption will take place), let’s answer some frequently asked questions that should help people decide on whether or not to travel and vacation in Bali. 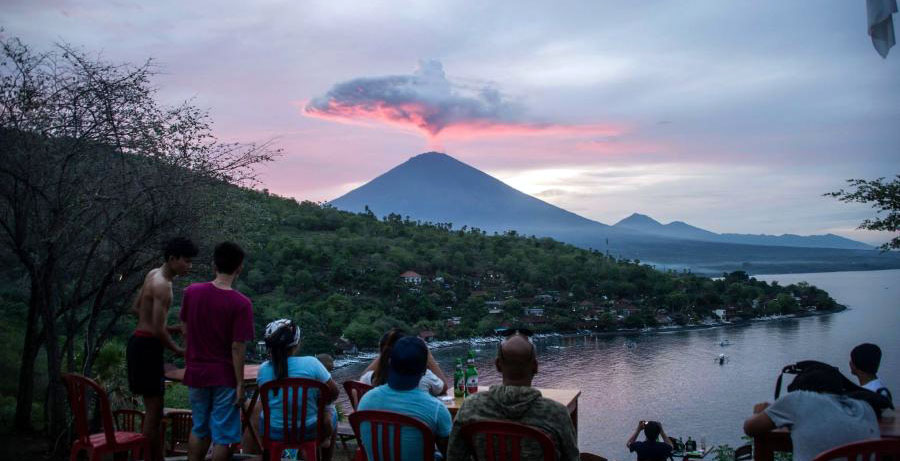 Q:  What is the likelihood that Mount Agung will soon explode?

A:  In truth, nobody knows. The increased seismic activity and relatively small eruptions since late November 2017, seems to indicate that Mount Agung is building towards a larger eruption. But Indonesian volcano experts (and Indonesia is home to come of the world’s most knowledgeable volcanologists) say that Mount Agung’s crater is either forming a hard crust that will prevent an eruption or that the magma reservoirs contained with the mountain is building energy that will be soon expressed in a larger explosion than what we have seen to date. Will there be a major eruption? Nobody really knows.

Q:  What will happen when and if a major eruption occurs?

A: In the event of a major eruption and assuming Mount Agung follows the historical pattern, we could expect a series of large earth tremors in or near the mountain followed by a loud boom signaling that a breach of the crater’s structure has taken place.  The resulting explosions could send clouds of rock, molten volcanic ash and gravel high into the atmosphere. In March 1963, the clouds of dust reached altitudes of 8-10 kilometers. Pyroclastic flows of super-heated gas might also flow down the mountain’s slopes.

A:  It’s been nearly 55 years since the last eruption of Mount Agung. In that period, Indonesia has undergone tremendous development. Indonesia is home to some of the world’s leading volcanologists, many of whom are now manning scientifically equipped observation posts surrounding Mount Agung and carefully monitoring every development. Warning sirens are installed in key locations near the mountain to warn if an imminent eruption is detected. Beginning in late September, experts outlined “danger zones” – the limited areas surrounding the volcano under direct threat of any eruption.

In 1963, sophisticated seismic instrumentation and trained volcano experts were largely unheard of meaning many villagers living on the foothills of Mount Agung died in the eruption. Should an eruption occur today, fatalities and injuries would be limited to the handful of local inhabitants who have refused evacuations orders already issued by local police.

Similarly, Mount St. Helena, a volcano that erupted in Washington State, USA in May of 1980, claimed 57 lives, comprised of researchers and members of the public who stubbornly ignored warning to evacuate issued by experts monitoring the Mountain.

Disaster mitigation experts have created detailed maps of areas at direct danger in the event of a major eruption limited to a radius of between 6 – 7.5 kilometers of Mount Agung’s peak.  The area at risk represents about 2% of Bali’s total landmass, meaning the overwhelming majority of people living on Bali are not a danger. This is particularly true for people visiting or living in the major tourism areas well removed from the volcano.

If these “red zones” are strictly honored and instructions from emergency personnel obeyed, the casualty count could be zero.

Q: What about the threat of volcanic ash and the closure of Bali’s airport?

A: Fine particles of volcanic ash hurled high into the atmosphere represent a safety hazard to modern aviation. The 2010 eruption of Eyjafjallajökull in Iceland disrupted air travel in the U.K. and other parts of Europe for periods ranging from one day to one week.

Closer to home, a magma eruption of Mount Agung on November 25, 2017, caused a 2.5-day closure of Bali’s Airport when volcanic dust was recorded in the high altitude approach and departure paths to Bali’s Ngurah Rai Airport.

Technology now in place and monitored both in Bali and from the Darwin (Australia) Volcanic Ash Advisory Center provide immediate warnings when volcanic ash poses a threat to aviation, preventing aircraft from encountering volcanic dust while in flight.

Worthy of note: The latest eruption of the Mountain on December 8-9, was significant and produced dust that did not affect air traffic corridors and Bali’s airport operated normally.

Q: But what happens when the airport closes?

A: If you’re in Bali during a major eruption of Mount Agung you will most probably only be aware of the eruption via news reports and information provided by the Bali Tourism Board Hospitality Task Force and your hotel’s management. Mount Agung is 70-kilometers away from the main tourist areas in South Bali.

In the unlikely event that volcanic ash is blown to the south – hotels and civic authorities would distribute facemasks to Bali visitors without charge.

If the decision is made to close Bali’s Airport because of volcanic ash it is indeed possible that no ash will be in evidence in the Airport or its near proximity, but that ash has been identified in airspace used by aircraft arriving or departing from the Island.

Q: Will I be stranded in Bali?

A: Even if the airport is closed, you will not be stranded in Bali. If the airport is closed on the day of your departure, you can choose to extend your stay at special rates available from your hotel or decide to opt out for an scenic overland trip in air-conditioned land transport arranged by the Island to an international airport in nearby Lombok or Java that remains unaffected by volcanic dust.

It’s best to bear in mind that Nature always has the final word. People living along the Eastern Seaboard of the USA or Western Europe take the temporary closing of airports due to Winter Storms in stride, knowing “this too, must pass.”  Possible flight disruptions due to volcanic eruptions also need to be seen in perspective and taken in good-nature stride.

In fact, as this article is being posted on line, the UK and the East Coast of the USA are experiencing winter storms that are closing businesses, schools and airports. And, like Bali, these locations will soon dig themselves out and get back to business at the earliest opportunity.